September 10, 2011
Ten years ago this Sunday, the people of Bosnia and Herzegovina, like people everywhere, watched as terrorists attacked the United States and in effect the entire world.  As we reflect on that day, we remember those we lost, their families and their loved ones, and we honor all victims of terrorism, in every nation around the world.

We honor them best by remaining vigilant and united to prevent new attacks and victims.  Terrorists worldwide have failed to achieve their goals.  Countries have responded collectively to reduce the threat of terrorism.  Through those joint efforts, we have sharply reduced the capabilities of terrorist groups.  The United States remains committed to working with partners around the world, including Bosnia and Herzegovina, to confront and counter violent extremists.
Most importantly, we are stronger today than we were ten years ago.  We are more united, better connected, more committed and better prepared to defend our people, ideals and dignity against those who seek to use murder to further their goals.  However, despite our successes against violent extremists who want to destroy democratic values, undermine basic human rights and impose their perverted values, the struggle will continue for many years.  We must and will remain committed to our core values and persevere in defeating these threats.

While tragedy and conflict can sometimes highlight differences, it is a common notion in the United States that our nation draws its strength from its diversity, from many people of different races and different religions working together as one nation, joined in pursuit of a more perfect union.  To defeat terrorism, individuals, communities, and nations must show they are stronger than fear; that their unity is stronger than their differences.

Far from being paralyzed by the violent actions of a few, people who have been victims of terrorism around the world have responded by focusing on pursuing better lives for themselves and their children; achieving greater levels of education; creating new economic opportunities; and improving the systems that govern them.  Working, in effect, to show they are stronger than fear. 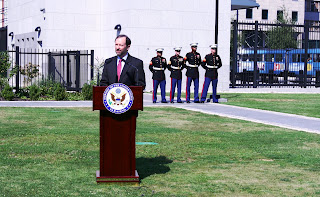 As this anniversary approaches, we also remember the heartfelt reaction from the people of Bosnia and Herzegovina.  When the attacks occurred, citizens throughout BiH sent cards, notes and flowers to the U.S. Embassy showing their sympathy and compassion.  Still recovering from their own heartbreaking war, they took time to offer condolences for our tragedy in the U.S.  Just one example was shown in a local newspaper, which ran a photo September 12th, not of destruction, but of friendship – a simple, handwritten note with flowers, saying “our hearts are with you” and signed “Sarajka.”
The United States thanks you for your sympathy and support ten years ago.  While together we remember the victims of terrorism, we honor and celebrate our resilience in moving forward side by side toward a better world.
9/11 Ambassador Moon