Jajce: Progress in the Fight Against Mines 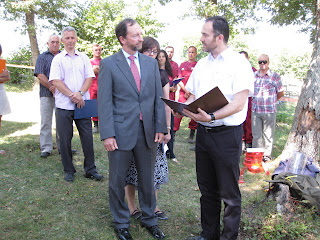 Removing the threat of mines in Bosnia and Herzegovina is vitally important, not just for protecting human life, but also for building the economy.  That’s why I’m pleased to have had the opportunity to attend a ceremony marking the removal of mines at a site near Vlasinje.  The mayor of nearby Jajce, Nisvet Hrnjić, and I spoke at a ceremony on August 25 marking the return of a site recently demined to the Jajce municipal government -- a project to which the United States donated more than $500,000 (the U.S. has spent about $100 million on mine cleanup in BiH since the war).
At the ceremony, we were joined by BiH Demining Commissioners Mustafa Pašalić and Zlatko Horvat, as well as dozens of other demining municipal officials and representatives of the international community.   The deminers had just finished removing more than 150 bounding mines -- one of the most dangerous types of anti-personnel mines -- a few hundred meters from a settlement with about 1,000 returnees.
We entered and left the village under bright blue skies and with the cheers of the dozens of children and their parents lining the road.   During the ceremony, I offered the condolences of my nation to loved ones of deminer Miroslav Kubura who died tragically after falling from a nearby cliff.  We also remembered the 600 other men, women, and children killed in mine accidents throughout BiH since 1996.   Their deaths remind us of the danger posed by landmines and the courage of those who remove them – courage for which we are all grateful.
The U.S. will continue to support the right all persons displaced by war to return home free from the threat of landmines and the right to seek for themselves a better life.
Jajce landmines