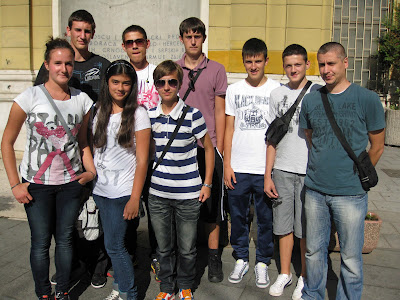 Last week, the Embassy sent eight young men and women plus their coach to a basketball camp in Montenegro.  The players came from Jajce, Stolac, Gorazde, Tuzla, and Bijeljina and represented both a wide spectrum of skills and ethnic backgrounds.  Within minutes of meeting each other in Sarajevo, it became clear that they all shared a common passion: basketball.  This is further proof of my belief that despite some of the divisive rhetoric we continue to hear in Bosnia and Herzegovina, the citizens of this country are willing and able to focus on their common future, not their broken past.
After arriving in Sarajevo, the players traveled to Bar, Montenegro, where coaches and players from Georgetown University’s renowned basketball team (including Montenegro native Sead Dizdarevic) offered tips and training on not only basketball, but also leadership.  Players from Bosnia and Herzegovina were mixed with other young basketball players from Montenegro, Kosovo, and Macedonia.  They had the chance to improve their jump shots and also their ability to lead other young people in creating the changes this region needs to enjoy the benefits of the European Union and NATO.
When the students returned to Sarajevo on Friday, it was obvious that they had formed close friendships.  I am eager to see what they can do with their new skills.  I want to personally congratulate our coach, Vladimir Micanovic, from Tuzla, as well as his team: Dejan Kokorus and Marko Manojlovic, from Bijeljina; Inra Lapo from Gorazde; Lamija Subasic from Tuzla; Edis Redzic and Lejla Kasum, from Jajce; and Stolac residents Damir Matic and Ilija Perutina.
Basketball Georgetown University Sarajevo sports diplomacy