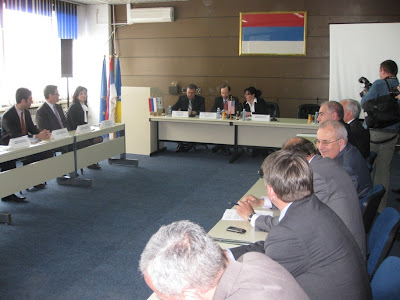 I recently returned from a comprehensive visit to Banja Luka, the capital of the Republika Srpska entity within Bosnia and Herzegovina.  In addition to consultations with RS political leaders, I had a broad spectrum of meetings with representatives from the RS business community, civil society groups, students at the American University of Bosnia and Herzegovina, and directors of a NATO-funded program to assist discharged soldiers in their transition to civilian life.
I particularly enjoyed speaking about strengthening the business climate in Bosnia at the RS Chamber of Commerce, where business leaders and I discussed the need for politicians to put aside political differences and prioritize improving economic conditions.  I addressed the importance of reducing bureaucratic impediments to businesses, promoting transparency, and creating more favorable conditions for attracting foreign investment, which has decreased ten-fold over the past three years.  These are short-term steps political leaders can take to galvanize the private sector.  In the long-term, I emphasized the significance of European integration – membership in the European Union, in particular – for Bosnia’s economic development.  In my travels around Bosnia, I have seen the abundance of resources in this country - both natural resources and, more importantly, talented people.  Opening up Bosnia’s goods, industries, and human capital to Europe will be mutually beneficial.  I encouraged the business community to be advocates for change and urge their political leaders to take advantage of their country’s many gifts by propelling the country forward towards EU membership candidacy.
To read my speech to the RS Chamber of Commerce, click here.
My visit to the Banja Luka Regional Resettlement Center (RRC) also impressed me.  Using a $2.1 million contribution from the U.S. government, $4.3 million from other NATO Allies, and over $2 million from the Bosnian government, the RRC implements the NATO PERSPEKTIVA program, which assists approximately 550 former defense personnel from the Bosnian Armed Forces with reintegrating into civilian life.  The RRC not only provides discharged soldiers with financial assistance for expanding their self-started businesses, but also contributes to their educational and vocational training costs, and assists them in finding employment.  As I told the program directors, professional armed forces take care of their soldiers while they’re in the service and after they’re discharged from duty.  I applaud the NATO PERSPEKTIVA program for playing a role in the professionalization of Bosnia’s Armed Forces.