January 20, 2011
Last Saturday, I traveled with my wife Danuta to Tuzla at the invitation of Tuzla Mayor Jasmin Imamovic to take part in a ceremony honoring the American civil rights leader Martin Luther King Jr.  In 2003, the U.S. Embassy donated a bust of Dr. King at the request of Mayor Imamovic who placed it in a park across from the municipal building.  The U.S. holiday honoring Dr. King is a day when Americans reflect on the courageous work of Martin Luther King Jr. to end segregation and promote civil rights for African-Americans. 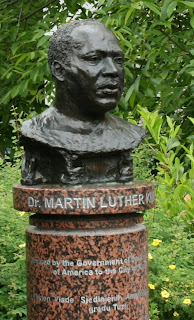 At the ceremony with Mayor Imamovic, I observed that by jointly honoring Dr. King’s legacy, the citizens of the U.S. and Bosnia and Herzegovina have shown they share the same values and believe in the same ideals.  Dr. King’s life should serve as an example and inspiration for those who are working to improve respect for human rights and to promote reconciliation among peoples.  I thanked Mayor Imamovic for his initiative and personal commitment to building better community relations.
﻿﻿﻿﻿﻿ ﻿﻿﻿﻿﻿ Danuta and I were also very pleased to be invited to Orphanage Day at the Bjelave Orphanage in Sarajevo.  Director Amir Zelic and the children honored members of the community who have volunteered to support the orphanage by teaching languages, coaching sports and providing other services.  The children had worked very hard to prepare an amazing line up of musical, dancing, poetry recital, and comedy performances for the invited guests.  From the dancing and singing act by the two-year olds to break-dancing and singing solos by the older children, we were impressed by their talent and showmanship.  I am not sure who enjoyed the performances more – the children or the audience.  Director Zelic and his staff are providing loving and professional care to each child, from infants to 18-year olds.  I was moved that so many members of the Sarajevo community – including some members of the U.S. Embassy – volunteer their time and provide special support to the Bjelave Orphanage.
Bjelave Orphanage Martin Luther King Jr.